A lot of you may think it incredibly ridiculous that I write a post about Alien Vs. Predator, but let me just put the skeptics at ease – I’m going to write TWO posts about Alien vs. Predator (tenderly referred to as AVP from here on out).

In this, my first post, I will go through the attributes, skills, and personalities of the two creatures and choose who I think will win this epic struggle based on might, fright, intellect/wit, and of course, social skills. I hope to give a thorough explanation of how and why each creature functions in the way it does – ultimately leading to a can’t-miss predicition of who wins the battle.

Let’s start with scare-factor. In case you’ve forgotten, or don’t have a fresh image of these beasts in your mind, or say you don’t have posters of them hanging above your bed like me, here are photographs of the two monsters. 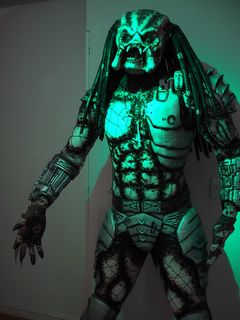 (The Bi-pedal Predator, how handsome!) 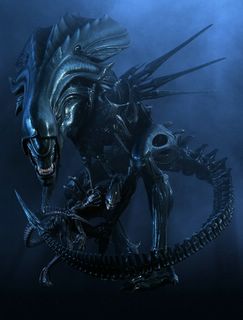 a. Predator is basically a humanoid form – despite his gargantuan size and super-claw mouth, Predator is kind of like one of those really ugly dogs – you realize its stupid and ugly looking, but you’re not too afraid of it because after all, its a dog. In fact, during my lifetime I’ve actually encountered a few people who look a lot like the Predator, and have thusly nicknamed them as such. They didn’t scare me at all.
Points: 0

b. The Alien queen looks like a scorpion with a giant fucking head – when was the last time you were truly frightened of someone or something with a giant head? That’s what I thought. People with big heads get made fun of, picked on, beaten up, and are forced to make friends with everyone just so they don’t have to put up with rough-housing and tom-foolery their entire lives.
Points: 0

2)Cohorts – Each freakish alien being has a cohort.

a. The Predator has his robotic-laser-guided-shoulder-pal. Albeit mechanical, this futuristic attack-system acts much like a pirate’s parrot….If the pirate were from outer-space, collected skulls, ate babies, and raped goats (I don’t actually know if Predator rapes goats, I’m just sort of assuming). But still, no one is afraid of some asshole with a parrot anymore – swash-buckling went out with powdered wigs.
Points: 0

a. The Predator has a ton of bad-ass gear. From the basic giant metallic hand-bayonets to a wicked self-suicide bombing mechanism there isn’t much this dude hasn’t picked up at Best Buy. He also has the invisibility cloaking mechanism which comes in handy when hiding from ex-girlfriends and peeping in lady’s showers.
Points: 1

b. The queen alien’s lack of gear is completely apalling. I mean I guess she’s supposed to be like some kind of huge bug or something and some people might argue her carapace counts as gear – but I’m not “some people.” I’m a dude who likes to see alien killers suited to the nine’s in guns, armour, knives, and all kinds of crap I couldn’t come up with unless I were high on drugs. So despite your teeth and inability to hold things without cutting them with your pincers, you lose this category Queen Alien…and I thought girls loved to have outfits and accessorize.
Points: 0

Next we’ll consider attributes. Attributes, for sake of a better system, will follow those clearly defined by the role-playing game, Mechwarrior – Intelligence, Charisma, Strength, Dexterity, and Reflexes. 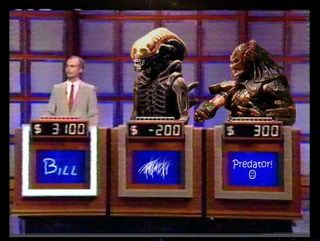 a. Predator’s major intelligence flaw deals with his love of skulls. This guy is a complete sucker for our cabasa calcium. He loves to admire them and chances are sleeps with a few of his favorites, lining them up on his pillow each morning. He also catches on to traps quickly as we noticed in his first hollywood debut when a shifty Arnold couldn’t quite pull the wool over his eyes. I’d also like to point out the score in the above picture where we can clearly see Predator is smarter than Alien.
Points: 1

b. Alien doesn’t seem to be quite as smart (again, reference above Jeopardy freeze frame). She can’t even write her name on the lightboard. It seems to me she basically is only good at finding a host. Especially in the newest alien movie when that giant alien got sucked out of the tiny hole into space…DUH! I mean even the humans managed not to get sucked out. I know you were just a baby Alien killer, but get with the program. Darwin would be ashamed.
Points: 0

2)Charisma
a. Predator is a pretty charming fellow. You could, with a lot of plastic surgery, dress him up and take him out to movies and bars and stuff. Plus he’s brimming with confidence, so he could basically pull anything off. Anyway, to prove me right I’ve included a picture of, what I think, is a pretty good lookin’ beer buddy.
Points: 1 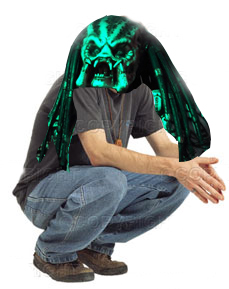 b. The alien would undboutedly be a social catastrophe. It’d be like that friend we all have who will just walk up to strangers and say (mouth dripping with a mucousy sludge): “I would like to lay my eggs in your belly.” It’s just embarassing, no, you know what? It’s completely uncalled for. Not to mention there is NO way Alien would ever buy a round of beers and chances are she wouldn’t even drink because of her constant state of pregnancy. What good is a beer buddy who won’t drink? The only credit I can give her is for sexual aggressiveness, I mean what guy doesn’t like that? But still it’s not enough to warrant a point.
Points: 0

a. Picked up Arnold by his neck and held him there for extended period of time. ‘Nuff said. I mean that’s pretty bad-ass. I don’t really know if Predator works out but he seems to be pretty ripped. It has to be tough to find a spotter at the gym though – then again, maybe not…
Points (provided he doesn’t actually use that guy as a spotter): 1

b. You know what? I don’t even need to give a reason. She just gets the f’in points.
Points: 1

a. The Predator can run really fast and hop around like the Easter Bunny. In fact, I bet Jesus would rather have the Predator represent the Easter Holiday then some shitty bunny. Let’s face it, if Jesus would’ve known about the Predator chances are there’d be a conversation in the Bible going a little something like this:

Jesus: Wow Pred, you can really move. Wanna be a disciple or some shit? Predator: Sure thing Jesu….oh, you know what? Shit negro. I’ms from outer space! Hows I’m gonna be travlin’ ’round this piece up with you? Jesus: Are you black? Predator: Are you? *awkward silence*

b. Alien is basically a lazy slug. All she does is sit around with her brood and then when there’s danger she’s sends the brood out to attack. I guess her tentacly pincer-arms are kind of cool, and definitely dangerous, but it seems she lacks the ability to really move when necessary. Who wants to be eaten by a mate who can’t dance?
Points: 0

5) Reflexes
a. I’ve actually played Predator in that game where you put your hands face up under someone’s face down, then you try and slap the crap out of it – he is GOOD. We then went to a nearby carnival where he played one of those old-school video games…what was it? Well anyway, the one Michael J. Fox plays in Back to the Future II. The Predator was ALSO a crackshot at it. Go figure.
Points: 1

b. Well, the Alien is really pretty slow. Do you remember in the movies? It takes her forever to even swing her behemoth head around. I think I could 3 point turn a garbage truck faster than the Alien Queen could catch somebody trying to play that joke on her where they tap you on one shoulder, but are standing on the opposite side of your body.
Points: 0

Wow, well folks I think its pretty clear. After a thorough and scientific examination of each creature we’ve reached a pretty clear verdict, and I think that I don’t need to tell you that the winner is……. 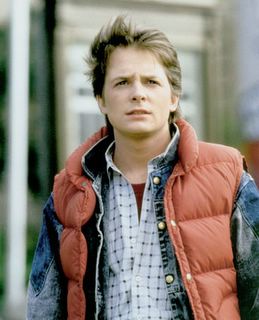 He skateboards, time-travels, fixes cars, changes lives, and do I even need to mention he’s wearing TWO jackets in this picture?! Alien and Predator would not even stand a chance – could nay hold a candle to Mr. Alex P. Keaton. Although the Predator does make a BIT of a case for himself in that he matches Fox’s skills at that old video game, the Crackshot title still doesn’t bring him up to snuff. So bring it on you Alien Bastards! Michael J. Fox will crush your skulls, pillage your towns, pee on the ruins, and then hover-board away before you could even begin to comprehend what just happened. In a single statement? He could blow your mind in one move or less.

Didn’t like this ending? There’s an alternate immediately below. I’m better than a DVD special edition, admit it.