Yeah that’s right, I completely called it. Predator won. And for those of you who don’t have the common decency to see the movie for yourself (silver-screen spectacle that it is), here is a brief recap of the history behind the AVP conflict:

At the dawn of the civilization of man, Predators came down from outer-space and taught man how to build things, kill things, and basically do everything we currently know how to do. They also built a giant pyrmid 30,000 feet below the earth’s surface in the arctic…crazy aliens!

Anyway, turns out the Predators bred the Aliens and each year locked themselves in the maze-like pyramid to see if they could kill the Aliens once they were unleashed. Humans were sacrificed to host the alien babies (Awww!). Hilarity ensued. If the Predators that went into the pyramid (3 of them) were about to be over-run by the aliens, they’d turn on their self-destruct bomb and blow them all away, ensuring that all the aliens would still die.

That’s the basic rundown. Anyway this time around its different because humans find the underground pyramid, mess up the whole system, and most of them end up dying except for one lucky girl who helps the Predator and they work together shooting rainbows, and riding on a cloud-car, to defeat the vicious Aliens.

Here are some tips that will help you in case this scenario actually happens (and in all likelihood, it will).

1) You can never have enough fodder – It’s best to bring along throngs of people, most of them nerdy with some sort of useless specialty that is entirely unrelated to combat of any kind (like heiroglyphs and super-fast basket-weaving). These hapless idiots will undoubtedly have some sort of goofy charm that makes you think they’ll survive, but they won’t. Just make sure you’re always where they’re not and you’ll be safe from all harm.

It’s also important to include militant assholes in your brigade of jerks. Theses guys are useful because not only do they die in a hurry, but they leave behind large weapons for you to use (which you protested highly against and don’t know how to use). Typically they come around or have some sort of shitty heart-felt sentimental moment with one of the nerds before they die.

2) Don’t be afraid – when you first meet the Predator, he will already have slaughtered a good majority of your team, and chances are he’ll be ready to pick you up by the throat and stab you – lucky for you, you read this post and the following three things that Predators are impressed by when trying to befriend them.

4) The above hint was a TEST! If you reacted by saying “I love the care bears!” or “aww!” or “I miss childhood” then you are not cut-out to help Predator. In fact, you are not cut out to live.

5) Bite off the head of a puppy or kitty…no not then, right now! You need to get used to mindless death and carnage ASAP. This is the best way, dive in head first. 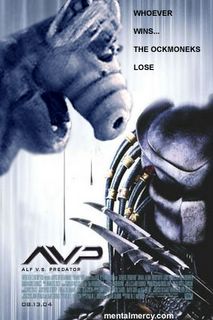