In case the lot (read: 6.31) of you that peruse my posts didn’t know, I am, among many other totally radical things,* a trombone player. If you are reading this and are thinking to yourself “What a complete loser” then chances are you are NOT a trombone player and ARE, more specifically, a jealous, non-awesome hoser*. If after reading the statement you thought “Oh, that’s interesting” you would probably enjoy my company. If you thought “Sweet! Me too!” then I’d like you to take your right hand, hold it up like you’re going to take an oath, and then hi-five the crap out of whoever walks by next.

This past year I haven’t played in any ensembles (save for an easter gig) for the first time in about 12 years. No orchestras, big bands, or symphonic bands. In fact I have actually played more bass guitar than bass trombone this year. But I picked up my horn today to practice for a friend’s wedding (God have mercy on their souls*) and was pleasantly surprised at the outcome. If I were a talented graphic artist I would insert an awesome picture I did of a lighting strike zarking the crap out of me but lighting me aglow and thus illustrating me having a bit of an epiphony and electrical sexcapade at the same time* – alas I’m a trombone player so you had to deal with simple words and your primitive imagination. Deal with it. Anyway my thought was this:

I will always be a trombone player.

That’s a really great realization to conjure. I will always be a trombone player. Here’s why:

You see? Playing trombone I’ll always have a pseudo-job. Granted the pay isn’t steady but I can always say I’m a trombone player. He’s another example:

Mugger: Hey asshole! Gimme all your money!
Me: I’m a trombone player.
Mugger: Shit, I’m sorry. Let me see here I think I have some spare change..
Me: Just toss it in my case. Thanks!

Being a trombone player isn’t lucrative enough for me to have lots of money. Criminals know this – in fact, most criminals are probably out of work musicians OR incredibly talented musicians who have blown their money on drugs and are looking to score more drugs but, since they blew all their money, they have to rob others.

Here’s some proof that I actually play trombone: 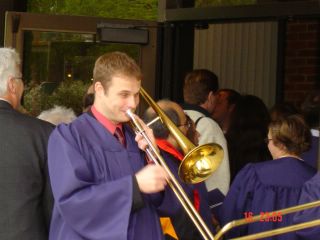 I know that was a completely rocky transition but it was getting time in the post to break up the monotony of just straight-up text.

There is one massive setback to being a trombone player, I don’t want to give the impression that I live in a perfect world. Being a trombone player is trying, lonely, and quite nerdy. But despite all the hardship, there is perhaps one thing that sticks out like a b natural in a Cmin7 chord, one phrase that skewer’s a trombonist’s heart, melts his mind, and crushes his dreams. That phrase is the following:

“Oh trombone! That’s the one that goes like this – wah-waaaah.”

This phrase is almost always accompanied by someone making a crude slide motion, typically with the wrong arm. It makes me sad that all people think trombone can do is glissando (wah-waaaah) when in fact it’s used for so many other gr…you know what? Forget it. IT’S THE ONE THAT GOES WAHH WAHHH!

I’ll leave you with one last thing – you should only click on this link if you have like 10 or 15 minutes of free time. It’s a hilarious video that a trombone player did to promote his upcoming recital. Peep it.

*I’d like to thank Canada for the word “hoser” – its just about the only thing they’ve contributed that is worth while.

*This should be considered an allusion to my terrible playing, NOT the fact that people are getting married.

*Just kidding Suga, I couldn’t have a sexcapade without you.