Lately the Florida lottery has aired some television spots that feature a large, red-headed woman with a Wisconsin accent. I have nothing against Wisconsin and surely nothing against red-heads (go Carrot Top!) and large people have never been anything but kind to me but my good Lord. Never have I seen a more unfunny, thoughtless, brainless, witless, moronic, stale commercial in my entire life.

I’m not sure if these ads are aired all over the states and merely changed to suit the corresponding area, but in case you haven’t seen it here’s a brief run down:

There’s a woman in a stand-up setting. Smoky, dark except the stage, spot-lit mic in the middle of the stage. She’s doing her “routine” which consists mostly of the following:

Comedian: What’s with those people that play the lottery when the jackpot is below 10 million?

laughs hysterically at herself

laughs some more, people in the audience are also laughing hysterically

indicates man in the audience

Do you play the lottery when its below 10 million?

Of COURSE not! You probably still live with your mom.
Well we wouldn’t want you to have to leave home would we? I’ll split it [the lottery] with her, she deserves it!

Just typing that made my brain boil and my blood run hot with rage. In order to prove how idiotic and untalented the commercial creators are, I’ve decided to do a few quick script re-writes of how the commercial could have been much more entertaining.

Comedian: So what’s the deal with those people who only play the lottery when the jackpot is OVER ten million?!

She laughs at herself hysterically….the audience is silent except for a hollow moan.

Camera finds man in audience. Man and all others in audience are zombies. Singled out zombie points to himself, tilts his head and moans.

Comedian: Yes, you. I bet you only play the lottery when the jackpot is OVER 10 million!

Zombie: Look lady, I don’t know if you’ve noticed, but we’re all fuckin’ Zombies. Now get down here so I can beat the hell out of you with my own arm!

Another zombie man, enthused by his response shouts out a “Hell Yes!” Zombie man tears of left arm with right arm, then charges the stage.

We hear only the woman shrieking as the screen fades to black and the zombie audience swarms the stage. The following slogan fades in:

Play the lotto before its too late, and you’re beaten to death by zombies.

Comedian: So what’s the deal with those people who ONLY play the lottery when it’s OVER 10 million? Those people are so stupid! What IDIOTS!

Comedian laughs hysterically at herself. No one else laughs. 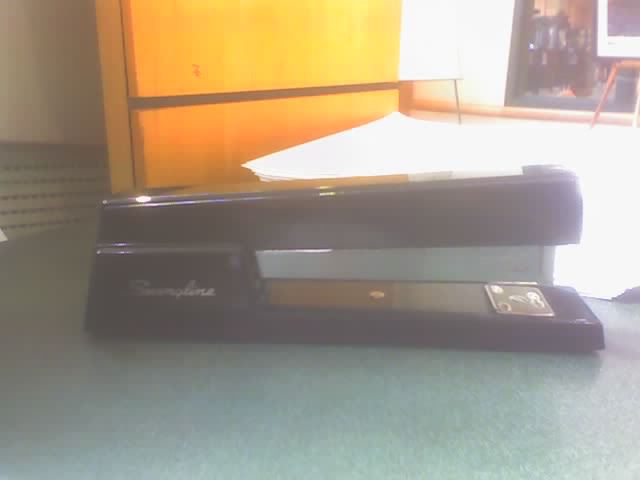 There is a sit-com like response for the beloved New Swingline as he makes his entrance.

Comedian: What the…? Who are you?

New Swingline: I’m the richest stapler ever, biyatch! And I wons me the lottery. I only played when it was over me some ten million. And you call me an idiot?

New Swingline: Play the lottery whenever you want bitches.

The “The more you know” theme song and logo flash. Fade to black.

Comedian: So what’s the deal with those people who ONLY play the lottery when it’s OVER 10 million?

Comedian starts to weep and shake uncontrollably. We see from a camera shot that encompasses the darkened audience heads and they are turning to each other with curiousity as the woman breaks down in front of them.

Comedian: I’m sorry. I make fun of people because I’m fat and insecure about my weigh–

Man in audience stands up.

Lights in house come up and everyone is a zombie. Comedian curls into a ball on the floor.

Man: Woah Nellie! We are gonna eat your brains!

Fade to black as zombie’s are seen swarming stage and chomping and slurping sounds are heard. The following slogan fades up in white:

Zombies! Play the lottery before they eat your brains!

There you have it kids. That’s my idea to revamp those awful lottery commercials. Nothing would please me more than pulling the horrendous ads off the air and replacing them with something much more comical, violent, or downright preposterous.