They all go hand in hand don’t they? No they don’t. If you said they do then you are really quite odd. Each of the above has brought about an interesting story in my life over the past few days so I figured I’d share it with you all.

I posted my futon on Craigslist in hopes to sell it before I have to move anywhere. Well I did sell it, but I forgot to take the ad off the website. This morning I got the following email from someone:

Hi…I’m Mary Jane and I’ll give you 75 and an hour’s massage if you want. Unless you have a zitty back or vote Republican.

I’m just down the street off 62nd Ave and Blue Rd.

…oh, or a hairy back either. Or are homophobic (but that’s negotiable for to know me is to love me and I do not have a mullet or wallet on a chain.) Plus it’s JUST a futon so none of that is relevant, right?

I mean holy crap, right? First of all the asking price was 200, so this is a pretty bad deal to begin with. But then she begins laying down ridiculous criterium. This brings me to my main* point.

It is so ridiculous to me to be extremely conservative or uber-liberal. Its so STUPID. As a liberal you preach to people about how they need accept homosexuals and people with alternative lifestyles, and want people to make their own choices with their bodies (ie abortions). Then you go around making fun of every Christian and every conservative you see because they’re all “idiots and liars,” and despite the fact they have CHOSEN something for themselves (ie: a religion) you find it impossible to accept. How very open-minded of you.

The extreme right is just as bad. It wants everyone to get along, but then goes out and blasts people with alternative lifestyles and people who get abortions. Last time I checked Jesus didn’t harrass or belittle anyone.

Here’s a message to both parties:

SHUT UP! STOP COMPLAINING THE BOTH OF YOU. Its like a bunch of idiot little kids. Not everyone will share the same exact views on everything and you won’t change each other’s minds!

Don’t people realize that they will NEVER be happy if they’re always choosing an extreme view? Isn’t it smart to realize that you don’t have to steadfastly stick to your party’s politics?

Being a moderate fucking rules. I get to make fun of EVERYBODY and agree with whatever the hell I want because it seems right to me at the time. I can change my mind too. Its so bodacious you wouldn’t even believe. But chances are if you fall into one of the above two categories, you were extremely insulted and came up with several arguments about why I was wrong.

Here’s another newsflash for you. Bush is going to pick someone conservative for his supreme court nominee. I don’t even understand why there is speculation about this. Be mad and whine all you want you supreme leftys, there’s nothing you can do. Right wingers, try not to cheer about it too much because the next time there’s a liberal president, you’d better believe he’d choose a liberal in any similar situation.

Al-Qaeda you guys are complete assholes. You don’t get people to believe in your faith by bombing the shit out of everything you see. Even radical zealots should realize that. You are so fucking stupid…and uncreative. Its like paste is your only food or something.

I was running the other day and a black Lexus pulls up beside me and is driving slow. I was like “oh this retard** is lost and is going to ask me directions.” Then the car drops back a little bit and I figure he turned. Nope. He keeps driving slowly right behind me, then pulls up alongside me again. After about 4 blocks of this I turn and look at the guy, throw my hands in the air and scream “WHAT THE FUCK ASSHOLE?!” 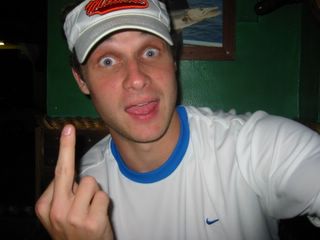 He speeds away. I swear if I would’ve had a rock, you’d better believe I would’ve whipped it at his car. Not only becuase he was being a complete psychopath, but also because he was driving a Lexus. Give me a break. Get a real car.

I know, I know, there’s a lot of pent-up rage in this post but I have just been pissed off and generally depressed about so much this summer that I can’t blow it all off with lame jokes. Its tough to deal with sometimes especially when the answers to questions asked are so entirely unclear.

This image should make you re-read that sentence differently. If it doesn’t, have someone explain it to you.

**Whenever I see someone I don’t know in Miami, I automatically assume they’re retarded. It has saved my life on numerous occasions. I hope I didn’t offend any actually retarded citzens. Trust me, you’re all smarter than the average Miami resident.