For those of you who are uninformed or ill-informed, Euro Trip is one of the funniest movies of all time. Thusly it has entered into a sacred land. A land where there are certain rules that MUST be followed and if they aren’t your peers chide you endlessly. A land where alcoholic beverages dictate whether or not you will stand later in the evening. Here are the rules to enter that land; to play drinking Euro Trip: 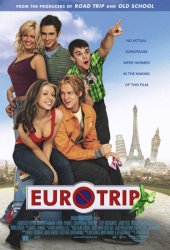 – Someone says “Scotty doesn’t know.”
– Cooper gets a call from, or calls, his office.
– The twins are “bad twins.”
– Jenny (the female twin) has to remind the guys that she is a girl.
– The lead soccer hooligan hurls an ethnic slur at someone.
– Cooper says “parked my car.”
– Jaime (the male twin) consults his Frommer’s book.
– You see a nipple.
– The kids move to a different country than the one they were just in.
– One of the main kids drinks.
– Bart (scotty’s little brother) mocks or corrects Scotty.
– Scotty gets an email.
– Fred Armisen says “Mi Scusi.”

Got more? Let me know and I will add them.