This post occurred to me mainly because it occurred to someone else. I was at work today and a co-worker who shall remain nameless (Julie) said:

“Hey Andy, I think you should do a post about me.”

Well Julie that was potentially the worst idea you’ve ever had. Because I’m doing it.

I wouldn’t say I “know Julie really well.” In fact I’ve only ever spoken to her at work and on Instant Messenger. The things you read here will be largely fabricated and for Julie’s sake please don’t think she actually does them (though she might, who can tell?).

First I’d like to start off with a picture…just so when you picture Julie, you picture her in the proper manner – drunk and out of control. 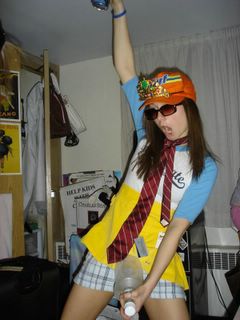 Just for the record I didn’t take, nor I was even present on the evening when this picture was taken.

From what I can tell, Julie’s weekends typically start out something like this…

Julie came home angry and discombobulated from having worked a double at Cafe 210 West. As usual she was letting her temper dictate the majority of her actions.

“Who is getting me a fucking drink!?” she screamed to an empty room, the veins in her neck bulging, her eyes bloodshot from the previous evening’s cocaine binge.

Just then there was a knock at the door…well, one she imagined anyway.

“If it’s that fucking leprechaun…” she muttered while stalking to the door.

Sure enough, gazing through the peephole (and the haze caused by heroine withdrawl) Julie spied Crackers McGill.

Crackers wasn’t an imaginary friend so much as he was an imaginary fiend. He had an amazing talent for coercing Julie into participating in things like arson, man-slaughter, and high-stakes poker.

Julie ushered in the pint-sized pusher and was concerned only for a second as she recalled her previous lusting for an alcoholic beverage. Crackers was carrying on about how he did at the dog track and working up to asking Julie for money when he was stabbed with a scissor and punted out the window. Julie grinned, happy she could get on to the finer things in life…getting drunk.

Not being quite 21…or 20, Julie decided it would best to hit up some hapless upper-classman goon to get her alcohol. She took with her all the usual things she used to get booze – her purse, her cell phone, and a really, really big knife.

Not having many friends (because she’d killed most of them) Julie’s new tactic involved finding the oldest looking guy on the street and asking him to get her beer. It was her lucky day. She had only gone a block when she came across a slow-moving, hunched-over man who walked with a cane. He looked older than anyone Julie had ever seen…yet vaguely familiar.

“Andy?”
“Eh..Wha? Oh Julie, sorry. I can’t hear too well. What with being SO OLD!”
“Will you buy me some booze?” she said brandishing her knife.
“You know you don’t have to threaten me. I will happily furnish your insides with delicious posion.”

So Julie got her booze and returned to her apartment to drink alone.

“Man, I sure do hate drinking alone.” She said aloud. “I wonder how I can get some company…” she wondered as she flashed back on how she’d met some other recent friends: killing a woman and dating her brother and “helping him solve the mystery” of his sister’s death, dealing drugs to kids, taking drugs with kids, and wearing skirts on blustery days.

“I’ve got it!” She sprang to her window over-looking college avenue and tore off her shirt screaming:

Seconds later her staircase was lined with thousands of Fraternity Brothers, participating in latently homo-erotic celebrations in congratulations of finding such a sweet score.

After murdering the frat boys, Julie painted the walls with their blood and invited some other cooler people in for drinks…and satanic worship. But that’s a whole other story.

Now you all know the Julie that I have come to know at Cafe. A ruthless, cold-blooded, substance abusing Penn Stater. But my good Lord, at least she didn’t go to Ohio State.