I can’t believe I haven’t posted about this yet, but better late than never.

At the end of November John Mayer’s newest album, TRY!, came out. It’s a live effort and it accredits all members of the group’s name: The John Mayer Trio. Steve Jordan is on drums and Pino Palladino is playing bass.

For those of you who turn up your nose at the thought of Mayer – insisting he’s “too poppy” or immature, you really need to check out this album. The instrumentation is akin to that of The Cream, and The Jimi Hendrix Experience, and I have to say Mayer’s work fits in well with that crowd.

Heavily blues influenced, Mayer thrashes away on his guitar while his bass player (Palladino) thumps away with a muted sound much like Tower of Power or Ugly Americans. Steve Jordan is great at setting grooves fast and slow. He reminds me a lot of the Roots drummer Quest Love. Mayer’s licks are catchy and dirty and his tunes, while not as chordally structured as his first two albums, are fantastic. They are different, fresh, and still manage to be a throwback to the blues-based trios of the past. 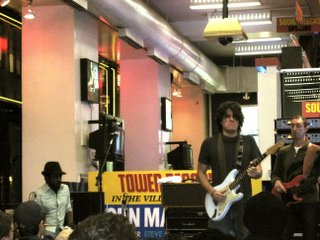 One of the great things I find about all of Mayer’s work are his lyrics. You can tell he works just as hard on them (either that or he’s a literary genius) as he does his unbelievably skilled guitar playing. His lyrics are especially pertinent if you’ve ever suffered from anxiety. He seems to know how to exactly word what goes on in a troubled mind. This album is no different, here are some of my favorite lyrics:

From Try!: “Gonna try to be myself although myself may wonder why.”
From Another Kind of Green: “You aren’t the perfect hand, but I don’t hit on 19.”
From Who Did You Think I Was?: “I got half a smile and zero shame. I got a reflection with a different name. I got a brand new blues that I can’t explain, who did you think I was?”

It’s so great to get another amazing album from John Mayer. I haven’t been this excited about an artist since I first got hipped to the Beatles. That’s how good John Mayer is. I obviously won’t say he’s better, he has a long way to go. But I will say I look forward to whatever he decides to throw at us next. 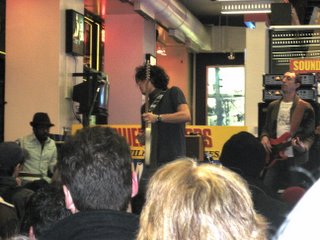 Unfortunately there are some drawbacks to the album. Since they’re all recordings from live shows there are actually two tunes from his second album – Daughters and Something’s Missing. I’m not a huge fan of Daughters in the first place, and its overplayed enough on the radio that I am a little mad its even on this album. The take on Something’s Missing is pretty cool and I love the song, but again, it would’ve been nice to have an album have 12 original tracks instead of 9 original and 3 covers (the third cover is an old blues tune called “I Got A Woman.” It’s a good rendition of the tune, but nothing too great).

All in all, the album is well worth the sticker price. If you liked John Mayer’s old stuff it make take you a listen or two to get used to this one. If you hate John Mayer I highly recommend you check this out. Here are some bands that have come to mind while I’ve been listening to this album:

The Cream
The Rolling Stones
The Beatles
Ugly Americans
Tower of Power
The Jimi Hendrix Experience
Pearl Jam
From the Clapton-like licks to the Pearl Jam-esque sound this album really proves Mayer as an excellent guitarist, prolific song-writer, and over-the-top jam master. Check it out, I promise it will not disappoint.