Saturday night always creeps up on you, kind of like a shower on an Italian. It doesn’t happen everyday but when it does, its pretty darn nice.

This Saturday I found myself playing Ultimate, followed by nearly 3 hours of doing laundry (that’s four full washing machines and most of the clothes I own). After dinner I grabbed my laptop to surf the net while watching Anchorman when I stumbled across something very disturbing.

Maybe I’m a little vain, but I decided to do a Google image search for my own name. That’s when I ran across this little tidbit of info: 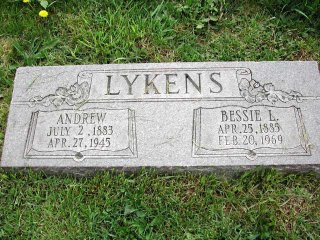 That’s right. I’m dead. Apparently, not only was I born exactly 97 years before my parents told me, but I actually died the year before either of my parents were born.

Naturally I was rather astounded but then I realized that I am, in fact, now the coolest man ali…ever to have lived.

Instead of being 25, I’m actually 122! Is there a reason Willard Scott hasn’t walked his fat ass to my door to congratulate me? How come there aren’t scientists studying me, figuring out how I can still be so active (and handsome…and kind of nerdy, and an arrogant jerk)? Maybe I’ve lived my life in dog years and just have no recollection of the first 97 years because I have alzheimer’s.*

I’m a little disappointed in my parents too. Bossing me around when I was a “kid.” What a joke. I should be scolding them for lying to an elder.

I also don’t know any “Bessie L.” It kind of seems like the name of a cow. I don’t remember having a pet cow. A cow did step on my toe once on my Uncle’s farm. I guess everyone mistook my shrieks in pain for shrieks of joy as I had finally rekindled a relationship with another holstein similar to the one I had with Bessie L. I wonder if the L is just a misprint and it actually stands for Lykens:

Grave chiseler 2: Yep! Kinda weird to call a cow-bride a widow but…whatever. What’s amazing is the damn thing lived self-sufficiently for 24 years after Andy died! But, now its time to add her to the ol’ grave-stone.

Grave chiseler 2: Thanks! Its nice to be appreciated. You work so hard, you know. After college I was like “What am I gonna do with myself now?” Then it just dawned on me, to get my Master’s in grave chiselin’! Best 3 years I ever spent.

Grave chiseler 1: You went to school? I just bought a hammer and a chisel.

Grave chiseler 2: …really? Cause I have like 7 thousand dollars in student loans to pay back…

Grave chiseler 1: Umm…did you….did you just put the L after her name?

Grave chiseler 1: Oh man, if you screw this up, its your ass! The boss said any more mistakes and our chiselin’ days are over!

Grave chiseler 2: No to worry my simpleton friend. In school they taught as a little trick for a situation as sticky as this one. (he chisels the period).

Grave chiseler 1: BA-ZING! You are a GENIUS! You rob the corpse while I get ready for some necrophili-action!

I’m also no longer worried about the early stages of my thinning hair. I mean damn I’m 122, I should be a cueball right now, buried in the earth with worms inching their way up and down my rib-cage (which tickles like I wouldn’t believe and makes hilarious Xylaphone noises!).

Also, to those who attended my funeral I’d like to say thank you. I hope it was a decent party and that the buffet was satisfying but not tacky or overdone.

My final thought about all this is a little bit complex. I wonder if that tombstone is actually history because I will have altered the past sometime in the future. In other words, if I meet a crazy scientist who invents a capacitor for flux (sometime in the future) and I go back in time but then it breaks (sometime in the past) – I’d be totally stuck there (in the past). So I’d have to make up a reasonable birthday and just live my life out normally (in the past) – dying before my parents are even born (in the FUTURE!). It’d be weird. But if I had to make a movie out of it I’d call it: “Future, Past, Past, Past…FUTURE!”