I’m not sure if you’ve recently seen the news that P. Diddy has recently decided to record an album with a can of Diet Pepsi. I know rappers love collaborating with each other, and usually it turns out pretty good, but I fail to see how allowing a can of Diet Pepsi to record with P. Diddy enhances hip-hop, or really any musical genre at all.

Things in the studio reportedly heated up when Diet Pepsi started making crazy demands like “Hey asshole, it better be a nice, cool, 40 degrees in here at all times” and “if that fucker Diet Coke shows up, tell him his ass is capped!” 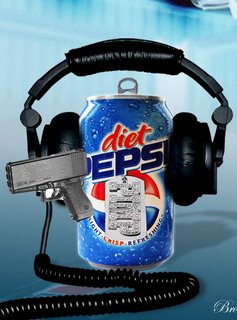 I was never really big into rap fueds or anything, but this can’t be good. I have a feeling the more hardcore RC Cola might take some lyrical swings at his more hyped counterpart with a West Coast producer. We don’t need another Tupac situation. I can almost see it now, Diet Pepsi can on the street, crushed, and holes leaking sweet brown lifeforce.

There’s also a rumor going around about a possible album coming out called “The Clincal Group.” Insider sources report this is most likely a collaboration between Dr. Dre and Dr. Pepper, who went to medical school together. Dre has hung up his gloves as far as his gangster days are concerned, but it doesn’t mean the fire won’t be fueled…Dr. Pepper has always just been kind of a bad ass.

Some lyrics have been released early for the FCC’s approval, though they’re almost certainly going to have to be re-written with tamer themes and expressions for radio broadcast:

There’s more but its really just more of the same – insulting other soda brands sexual orientation and using the F word profusely. Sierra Mist has responded to the lyrics:

“Thith ith an outrage! I can’t believe Diet Pepsi could be soooo not fabulous. Bye-ie!”

Pepsi is a little outraged as well because of the hatred spewed about its own products. They demanded a public statement to which Diet Pepsi responded by driving by Pepsi-Cola headquarters with his middle finger out the window in Puffy’s infamous Diet Pepsi truck. Puffy couldn’t be reached for comment.

Personally I’m just worried about what this means for the genre, for the music world as a whole. The last thing we need is musicians killing each other – well that’s not true. I’d love for musicians to kill each other provided they aren’t any good. You know what? Rap on Diet Pepsi. I hope you bring Kevin Federline down with you.