It’s kind of like eating a little piece of Heaven every morning, though my guess is Heaven has kind of a crunch to it. As long as you don’t let it just sit in the milk too long. You really gotta get after it. Otherwise you’re just going to be sitting there, shoveling this mush into your mouth. Which is kind of like oatmeal, but its cold. Who wants to eat cold oatmeal? Idiots that’s who. Maybe little kids. They eat the weirdest stuff. Like ketchup on spaghetti. What’s up with that? I mean yes it’s made of the same stuff that spaghetti sauce is but it’s not the same…

But back to Quaker Oats. Its as if God himself said “You know what I’m jonesin’ for dudes? Some wicked-awesome oats – only hot…reeeeal hot.” and poof, Quaker Oats.

I don’t know if its because the Quakers were so religious or because Jesus liked their hats so much, but whatever it was, they were blessed with the most awesome food of all time. Their oats have turned out to be the best oats in the world. Horses everywhere agree. 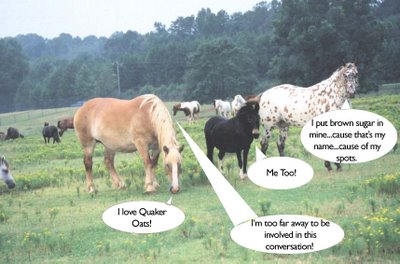 You can put anything in them: fruit, sugar, brown sugar (as suggested by Brown Sugar above – who would prefer you not mistakenly add him to your oatmeal instead of actual brown sugar), and some radicals have even suggested cinnamon. Cinnamon might be just a little too outrageous for those more conservative with their oatmeal topping selections, but for the truly bold it is said to be “like being sent by donkey on a far off adventure.”

I know it doesn’t sound that great, but, its just cinnamon on oatmeal for God’s sake. It’s not like winning the lottery and then buying a helicopter. If I won a helicopter I would fly to Heaven and talk to Moses. I know most people would try to hit up JC or God but I think those guys probably don’t want to be bothered. They have enough to look after and I’m sure the lines are long. But I mean Moses would probably be pretty cool to talk to:

Moses: Not much man. I crossed the dessert like 2 thousand years ago, and I am still finding sand everywhere.

Andy: Oh that stinks, I wond–

Moses: I mean I am in Heaven. You would think after so many years in the most perfect place of all time that all this sand would, you know, eventually just sort of shake itself out.

Andy: No, I guess, I mean did you talk to Jesus?

Moses: Please, don’t get me started on that guy. Every we time we play bridge that f’in jerk trumps me. I won’t even mention Trivial Pursuit night. The worst part is he won’t stop wearing that STUPID Quaker hat. I’m all “JESUS! Stop wearing that hat! You look like an idiot.” And he’s all “Peace, my son.” It’s SO aggravating!

Andy: Moses I don’t know if you should call Jesus “that f’in jerk.”

Moses: Of course, take his side. They always do. You know what man? Why don’t you just go talk to Jesus. Because I sure as hell don’t want to talk to you. DAMN THIS SAND! Hey can you do me a favor? Just run your little finger down my–

Andy: Whoa hey, you know what, um, Mose. I’d love to help you out but I think…yeah I think Johnny Carson just passsed by – I’m gonna go see if I can grab him because…well because its better than digging sand out of your crack.

My next stop in the helicopter would be the grocery store. To buy Quaker Oats. And maybe brown sugar…and hell, I’m rich, why not Brown Sugar too? We could share. It’d be great. I like his spots. He’s like a big, funny, horse-clown.