I watch American Idol ((though unlike the rest of the straight males out there, I do not need to come up with an excuse like “I flip to it during commercials for the NBA*” (which, as we all know thanks to White Dade, is completely bogus since an NBA game is entirely made up of commercials). That’s right, my reason is totally built-in due to my college degree AND master’s degree and I’m glad to know they’re finally doing me some good)).

I’m also complete music snob as I majored in Music Performance (Trombone) in undergrad and Music Business in graduate school. I feel it’s my duty to completely berate the talentless hacks that the industry throws our way. I know the public won’t do it, that’s for sure.

Before I continue I’d like to explain that I’m not a snob for the fact that I only listen to “indie” music (or, as I like to call it, bands that no one else has ever heard of). On the contrary, I actually don’t like most indie music because, well, most indie music is complete trash. I am a music snob in the sense that I like music that has lots of chord changes (jazz), takes real skill to play (jazz), and has meaningful or thoughtful lyrics (jazz). That being said I don’t only listen to jazz, I do listen to lots of popular stuff.

At any rate, as I’m sure most of you know, the other night was the finale of American Idol. The winner? Taylor Hicks.

I must admit I hadn’t really heard the contestants sing all that much on the show. Sometimes I’d get home late and miss everything but the little clips at the end before Seacrest signs off for the night, so last night was one of about 3 times I’ve actually heard Taylor Hicks sing. What complete garbage.

First of all he sounds exactly like Michael Bolton. I’m not sure that Michael Bolton would get any votes had he gone on the show ((and my good God, I heard him sing about 3 seconds of a lousy big band arrangement of a GREAT Stevie Wonder tune on a late night show and I almost threw up. Mike was performing to promote his new album…and I guess if you’re an idiot and think that Bolton singing…you know, not the best choice of words, Bolton butchering…still not quite there…Bolton pooping on a CD and ruining a bunch of great standard jazz tunes and the name of one of the greatest singers of all time (Frank’s phrasing is not to be matched – his voice only sounded good through the 40’s), then maybe you’d buy the CD after hearing this)).

I feel much the same way about Taylor Hicks. The song he sang at the end was atrocious. He had no idea what pitches to sing until he started singing loudly and higher…at that point he did have an idea of the pitches to sing and they were the worst ideas I’ve ever heard in my life.

Also, the show is called American Idol. Idol. Based on looks and “talent,” I will tell you right away you would be very hard pressed to find people who idolize Taylor Hicks.

Child: I want to grow up to be portly, southern, and a shameless promoter of my shitty rock band! I’d also like to be terrible at singing!

Mother: Come here. (Child walks over, Mother slaps him right in the mouth) You have two choices. You can never speak again, or you can go murder yourself in the back yard.

Taylor also happens to look like a retarded person when he sings. In fact, here’s a pretty good picture of what it would look like if Taylor were to compete in the Special Olympics (definitely a possibility) and win a medal (not very likely): 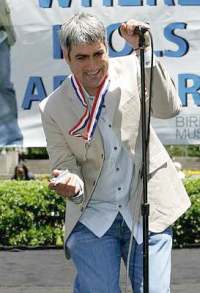 Way to go Taylor, pump that fist! Apparently this is what Americans truly look for in a pop sensation. Lack of talent, lack of faculty control, and pre-maturely gray hair.

The guy also screamed “Soul Patrol” constantly. I think Soul Patrol might have been his band back in Alabama but I’m not entirely sure. Either way I don’t care. I would never actively listen to Soul Patrol, and if it came on the radio I’d most likely turn off the radio…and then break the radio, and then send the bill to Taylor Hicks with a little note that says “Thanks for ruining music.”

Finally I’d just like to pose the question, how on earth did he get so many freakin’ votes? There’s no way that young teenage girls thought he was cuter than some of the other dudes. Here’s my theory: Taylor hails from Alabama. Alabama is where people marry their own sisters and cousins. My guess is that Taylor’s sister/wife and all their children/cousins which are all married to each other, have a tremendous amount of “family.” I’d be willing to put my money on the fact that Taylor is related to everyone in Alabama. He’s like the Kevin Bacon of Alabama. If you ask someone in Alabama if they voted for Taylor, they’d say yes, then you’d ask why, and they say something like “well his son/uncle had sex with my dog/sister so I’m kind of related to him…woof.”

Good job America. When your kids grow up to be doughy and gray-haired and sing Michael Bolton tunes all day long, I will laugh long and hard at you as you try to obliterate your own eyes and ear-drums.