My boss was on the phone with a client this afternoon. There’s really nothing interesting about this – well, typically there isn’t, except the guy he was talking to had an interesting voice.

I sit across the room from my boss and I could hear this dude through the phone’s handset. I was like “Hey! I recognize that voice!” I immediately IMed Erik because I know he takes great delight in stupid crap like this.

“You know that black droid that the Empire sends to scout Hoth in Star Wars, Episode 5, the Empire Strikes Back?”

“I think he’s on the phone with my boss!”

“He’s got all those extra arms, great for multiple synths.”

You know which droid I’m talking about right? The one that sounds like it’s saying “nerdsinthesystem.nerdsonalert.” through a stoma voicebox over and over again? Oh, oh, you want me to put a picture up? Oh, because you don’t get it? Well that’s FINE! That’s just GREAT! Here it is, simpleton: 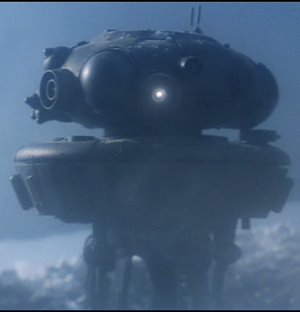 Since we’d already given this thing an occupation, and had a face for it, the next step was to involve it in some ridiculous scenario. That scenario begins….NOW!….wait, wait…NOW! no no, wait, wait….NOW!

Guy at Work: Hey, Probe Droid, go get me a coffee! This one’s cold!

Probe Droid: My name is Lawrence! I have feelings you know! Gosh!

GAW: Are you going to get my coffee or what? I am very busy!

GAW: Look, just, go. Get. The coffee. I can’t take your back-talk today!

PD: FINE! This isn’t even part of my job you know?! I am a complex machine capable of performing highly difficult tasks and operations all at once, and I don’t need you demeaning me!

PD: (in a harsh whisper) Ever since we slept together you’ve been treating me terribly at work! Well I’ve had it! You can get your OWN coffee from now on! (PD takes the coffee and mechanically dumps it on the ground, then drops the cup. This isn’t very dramatic as it’s actions are fairly slow due to it’s innate roboticism…and faggyness)

GAW: (matching his tone) I told you from the start it was just a one night thing! I don’t know where you crafted these fanciful, romantic ideas of yours! You’re certainly not programmed for THAT!

PD: Well, after today? All the others around the office will know what you’re not programmed for!

PD: That’s right buster! (PD turns and turns to float out of the room) Nerdsinthesystem.Nerdsonalert.

GAW: I didn’t mean to hurt your feelings…in fact I wasn’t even sure you had feelings at all, because you’re a ro-

GAW: I Love you too.

(They embrace. The end.)

That’s pretty much how I imagine it would go if a probe droid was able to find work somewhere. It would be gay, and fall in love. You know…because its a probe droid.