I’m no God-hater, in fact, I really like God. I think he’s really nifty. But unfortunately for all you super zainy Christians out there, I’m Agnostic. Really I don’t know what to think except that I do believe there is some sort of positive all powerful force and generally if someone believes in a certain faith I think its great because it means they’re following positive and good-natured values. Unfortunately some people take it a bit far.

My friend sent me this link. Apparently there is a new “museum” in which people actually get to talk to dinosaurs who tell them the “truth” about creation. This was a smart move by the uber-Christians. Everyone knows if you want to prove yourself right, the only way to do it is through talking dinosaurs.

At any rate, I got to thinking how much fun it would be to sneak into the “museum” and re-write the scripts. Here’s how I think it would pan out…

The “truth-telling” begins in the lobby, where guests come face to face with a pair of young T. rex dinosaurs, dressed in heathen street clothes and wearing sunglasses, and living alongside Adamâ€™s children.

Animated young T. rexes in the lobby: â€œOf course we lived at the same time as humans! God made dinosaurs on the same day as Adam. And later we drank from the same waters as Adamâ€™s children…I mean we had to drink the same waters because we were so thirsty from eating all of Adam’s children. They were delicious. God made you delicious. Doesn’t that make you feel special?â€ 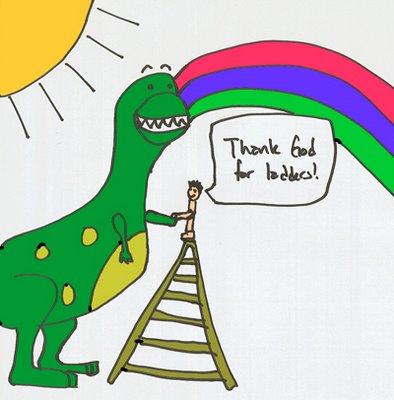 In the next room, guests will discover more “truths”. This time, they hear from a fossilized dinosaur raptor, still half-buried in a dig site.

Dinosaur raptor fossil in a dig site: â€œI’m still half buried! This is fucking terrible! OH GOD IT HURTS! WHY HAVE YOU FORSAKEN ME?! OH MY GOD! FUCK. Hey, hey kid. See that chisel? Get it. Get it and try to dig me out! I CAN’T TAKE THIS! AAHHHHHHâ€

In the next room, guests learn how the â€œfactsâ€ get distorted by museums and school textbooks.

Animated dinosaur raptor in a room on worldviews: â€œDonâ€™t believe everything you see…except talking dinosaurs. Believe those. They’re real. And believe what I’m about to tell you. It isn’t just made up…really…anyway Dinosaurs did not turn into birds! Thatâ€™s a tall taleâ€”with no foundation in reality! Except for science. And let’s face it, science is the worst subject in school. No one likes it. No one except the devil. And with science the devil says The â€˜Age of Dinosaurs, millions of years agoâ€™ was concocted to promote a belief that life arose without God or cookies (and I know you love cookies). It makes more sense to believe a talking dinosaur. Because I talk, and I’m a dinosaur, and I love cookies. If you like cookies, then why would you ever believe science?”

Later, the museum takes guests back in time, to the Creation Room.

Ceratopsian (horned dinosaur) family portrait in a room on the six days of creation: â€œYep, thatâ€™s my great-great-grandfather, who lived about 6,000 years ago. God created him on Day 6, along with all the other land animals. But I wish he hadn’t. He was a drunk and he beat the shit out of me all the time. And my mom wonders why I’m a heroin addict now. That fuckin’ bitch. Maybe if she would’ve spent more time with me instead of jerking off her dead-beat boyfriends all the time I’d’ve turned out alright.”

Were dinosaurs on Noahâ€™s Ark? Guests will discover the answer from dinosaurs who were there.

Dinosaur â€œkindsâ€ loaded onto Noahâ€™s Ark: â€œItâ€™s easy to explain how we fit on the Ark. Noah had a magical shrinking machine! It was rainbow-colored and made of lollipops and taffy and the good boys and girls were allowed to go inside and take a bite! The bad boys and girls were shrunk to the size of berries and were eaten!â€

After the Flood, guests learn the “common-sense” reason that we find all these fossils in rock layers all over the Earth.

â€œLivingâ€ fossils in the post-Flood room: â€œJust how did dinosaurs die? Skeptics are open to every wild idea…like the climate got too cold. Can you imagine? The earth getting cold?! The earth doesn’t get cold! It always stays nice and warm! But it DOES flood. The entire earth floods. It just might flood tomorrow and you’ll die and go to hell if you don’t believe me! Isn’t that fun? Have a nice day!â€

Oh “truth” museum. You’re so informative and educational! Thanks for saving all of our souls from eternal damnation and dinosaurs. Now if you’ll excuse me, I have to go disprove Darwinists with some sock-puppets.